"The medium of lithography is dust, the petrified dust of a time when the first birds were taking flight into the sky. The lithographic stone used by the artist is a block of lime one  hundred and fifty million years old....In a world of shifting values, changing perspectives, refracting visions... what greater teacher than this silent substance, hard and stubborn as stone and yet so exquisitely sensitive that it can record a breath of air."

Lithography means“writing on stone” in Greek.

Senefelder published a textbook on his method in 1818, the only printmaking technique described by its inventor.

All ingredients for lithography (stone, ink, water, gum arabic, rollers) were readily available in the Middle Ages: Senefelder ingeniously exploited the warring elements of water and ink to separate the printing and non-printing areas within the same  plane (planographic). He called it Chemical Printing. In a woodcut, this separation is done physically, with the artist gauging away the areas that are to be blank.

Our most valuable fossil, the Archaeopteryx Lithographica, was discovered in the Solnhofen quarries in 1861, giving Darwin positive proof for his theory of evolution, published just two years prior.

More than 50% of all publications are printed with the lithographic method, yet few know who invented this method of printing.

Part of the San Francisco Bay has been filled with tons of lithographic stones, dumped there when aluminum plates took over.

The grain of the stone, with its peaks and valleys, bestows depth and luminosity, however somber the image. The stone's grain gives a lithograph its unique character.

The stone is blind, it sees no color, it only feels and absorbs grease, which will be turned into ink when printing.

Stone lithography has been abandoned by the industry. It is also endangered as an artist's medium.

Black is the most difficult color to achieve in a crayon lithograph. 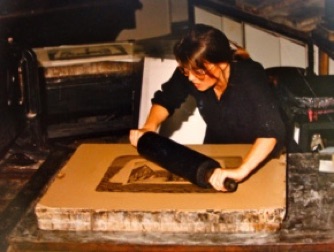 Herlinde Spahr printing "The Artist's Proof" at the International Center for the Graphic Arts, Kasterlee, Belgium