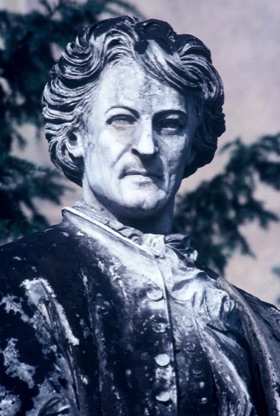 Whereas the beginnings of relief printing and etching have been lost to history, the birth of lithography is described in great detail by its inventor, Alois Senefelder (1771 - 1834) in his Vollständiges Lehrbuch der Steindruckerei (Complete Course of Lithography) published in 1818. While his first dream was to become a succesful playwright, printing his own works and supporting the family after the death of his father, his unplanned discovery of the possibilities of a faster and cheaper method of printing ended up occupying the rest of his life. His invention did not involve new materials, but it involved a new and complex, almost alchemical, interaction of existent substances. All the ingredients for lithographic printing – limestone, gum arabic, nitric acid, grease, were readily available in the Middle Ages. It took Senefelder's flexibility of mind to ferret out the intricate procedure that would soon become the dominant method of printing. Even today, more than half of all commercial publications are done by the lithographic method. Senefelder died wealthy and with full recognition for his contribution to humanity. But his name has been forgotten.