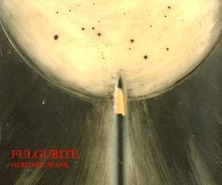 "When lightning strikes sand, it was long believed that the energy just dissipated. But apparently, the searing heat continues into the sand, leaving its imprint in the shape of a hollow, jagged tube of molten glass named "fulgurite," which in my mind has always been connected with the artist's legacy, with capturing the flash of the imagination in the shape of resistant matter."

"It was that rare period in the studio when emotions solidified into matter with little resistance. It felt as if I was working inside the still zone of a hurriane: extreme states of mind would gently be sealed inside the sheen of the wax.”

Herlinde Spahr, From the Preface

The book reproduces the entire series of Fulgurite with 72 color plates, and 40 pages of notebook excerpts. The unifying force of the series is the attempt of charting the trajectory of the imagination in the guise of the pencil, the artist tool par excellence. This pursuit leads the artist to explore three different media: facsimiles of the lithographic stone cast in wax, stone lithographs and large scale drawings, both on Formica.