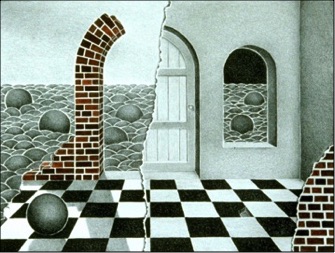 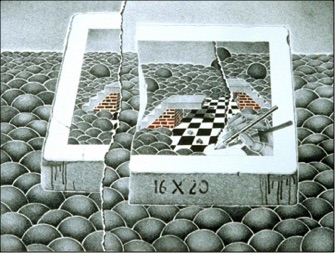 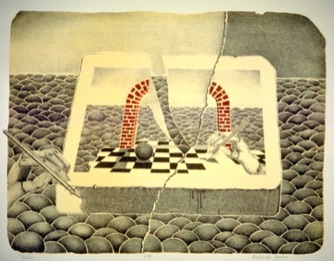 Chop of the International Center for Graphic Arts

"The lithographic stone is broken, the paper torn, the arches pulled apart and the two hands are drawing on different levels in the image. Although it was not intended as such, the lithograph captures the inner tension at the time between my desire to be a full time artist, and the commitment to finish my dissertation as a graduate student at UC Berkeley.

The print anticipates the series of casts made from the lithographic stone in the 1990ies which were poured in hydrostone or wax. Instead of keeping the matrix hidden in the artist's studio, I chose to make it visible and a vital part of my imagery.

While the stone may seem like a solid foundation onto which to build a work of art, it is fragile as glass and breaks under pressure. "

Statement for the Library of Congress. Herlinde Spahr 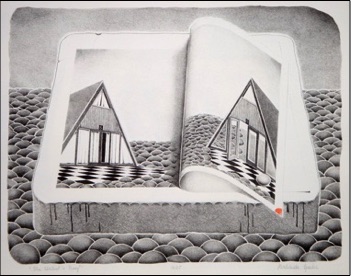 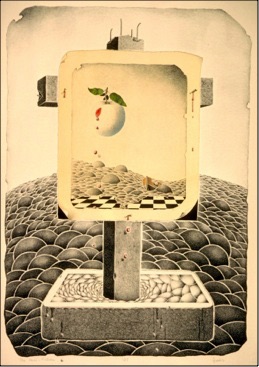 "Techniques and materials used for the crucifixion were originally rough timber, unhewn. As time passed and the image of the crucifixion of Christ became a staple in the arts, the form of the cross was developed and refined. Ultimately it reached its recognizable form, the hewn timber cross. Yet, as the cross developed into its refined form, artists began to render the form of Christ more simply, more two dimensional.

Herlinde Spahr has taken that development a step further, making the cross of concrete and steel and reducing the form of Christ to a complete flatness – to a sheet of paper. On this paper, Spahr has illustrated a floating and bleeding Magritte's apple, (from "The Son of Man") begging the question of what might it be hiding and why is it that it bleeds.

The lower left corner of the Crucified image is cut by the artist, intended to be rolled up before framing as to mimic the drawn ilustion of the opposite lower corner of the crucifixion paper. The illusion is made complete by a piece of acid free black paper backing. left unmounted to the verso of the impression.

Commentary by the Annex Galleries. 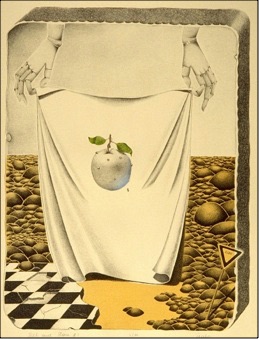 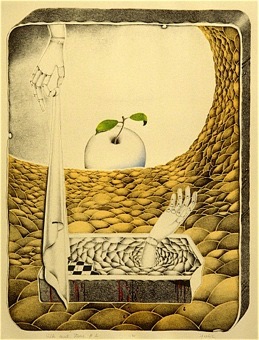 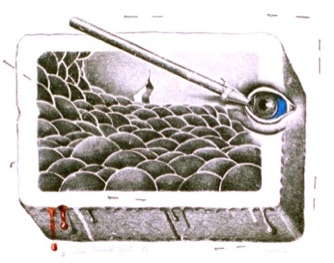 "Perilous Crossing" presents both a candle in flames drawn on a lithographic stone, and a candle snuffer, a reminder of life's fragility. The print is as much about the darkness and enigma that surrounds our lives, as it is about the power of art to preserve the flame, to intenisify the light.

Perilous Crossing was featured in Art in Print. (Vol 4, Number 3)