Born in Antwerp, Belgium, Herlinde Spahr moved to California in 1977 where she graduated in the field of Comparative Literature from the University of California at Berkeley. Parallel to her academic studies, Spahr became interested in the medium of stone lithography, working in between her academic courses at the ASUC Studio on campus which had an old Griffin press and lithographic stones. By the time she received her Ph.D, she had become a master lithographer, printing her own work and exhibiting her prints. Herlinde Spahr soon set up her own studio, Lithium Press, with a focus on stone lithography. Beyond publishing traditional editions on paper, Spahr also explored more experimental approaches to lithography, including large collaged works printed on Formica, and lithocasts, trompe l'oeils that recast the lithographic stone in plaster and in wax. Her most recent work involves large and unique works on panels of Formica, employing techniques borrowed from printmaking.


Spahr's work has been recognized with many awards and her prints are included in major public collections among which are the Fine Arts Museums of San Francisco, the Oakland Museum of California, the Morrison Collection at UC Berkeley, The Royal Museum of Antwerp, the Prentenkabinet at Antwerp and at Brussels, the Janet Turner Print Museum at the University at Chico (CA,) the Worchester Art Museum, the Museum beim Solenhofer Aktien Verein (Germany,) the Vietnam National Fine Arts Museum in Hanoi, the Library of Congress, Washington DC. She has been awarded a Fulbright Grant, a Chancellor Fellowship, a Princess Beatrix Scholarship, the Kala Fellowship. She has frequently been invited as an artist-in-residence.

Spahr has been documenting her work in books since 1979. Three books combine images of her work with excerpts from her notebooks, providing insight in what motivates the artist. The website documents these publications.


The Bancroft Library of Rare Books and Manuscripts at UC Berkeley houses the extensive correspondence between Roy Ragle and Herlinde Spahr, a master woodcut artist and a lithographer. The collection holds more than 600 handwritten letters with original art and studio proofs that represent a rare document of friendship between two printmakers in the San Francisco Bay Area. The correspondence spans the period of 1987 through 2014, a few days before Roy Ragle's death on December 11, 2014.

In addition, Spahr has collaborated with the California poet Leonard Nathan on the translation of poems by the Dutch writer Cees Nooteboom. "The Captain of the Butterflies"at Sun & Moon Press received the nomination for the Pen West Award in Literary Excellence in the category of translation in 1998.

Spahr's lithographs are included in the book "The Best in Printmaking. An International collection," and in "60 Years of North American Prints. 1947-2007" by David Acton. Her work has been featured in publications such as "The Berkeley Poetry Review," "Occident," "The Wilson Quarterly," " Maatstaf," "Nieuw Vlaams Tijdschrift," "The Journal of the Print World," "Printmaking Today," "Artweek." A color portfolio documenting the suite of "Fulgurite" appeared in The Georgia Review and she was featured in Aquifer, the Florida Review Online, published by the University of Central Florida. Most recently her work was featured in the literary magazine of Phoebe.

Her involvement with lithography has led Spahr to write a series of articles about the nature of prinmaking. Her latest essay > "Hendrik Golztius: The Tell-Tale Hand," was published in the Journal of the Print World.

In her book "Open Studio. Work from 1977 to 1997" Spahr notes: "The medium of lithography is dust, the petrified dust of a time when the first birds were taking flight into the sky. The lithographic stone used by the artist is a block of lime one hundred fifty million years old ...In a world of shifting values, changing perspectives, refracting visions ... what greater teacher than this silent substance, hard and stubborn as stone and yet, so exquisitively sensitive that it can record a breath of air." 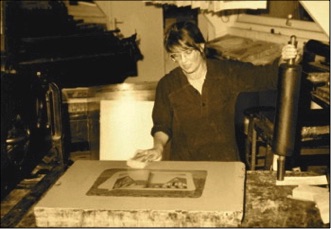 Herlinde Spahr at the International Center for the Graphic Arts in Kasterlee, Belgium